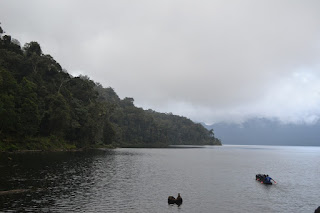 At almost 2000m above sea level ,Danau Gunung Tujuh (the Lake of Seven Peaks) is the highest lake in southeast Asia and is reputed to have a depth of 250m. This crater lake has long been considered  by the inhabitants of the Kerinci region to be the home of a short but powerfully built primate whom they call Tirraw, and nobody knows the remote valleys that surround the lake better than Mr. Jur. A semi-permanent resident since 1974 he has assisted on every major Orang Pendek expedition to the lake since the early 1990s but has never been interviewed,until now.

Prior to becoming declared a national park some twenty years ago,Mr Jur extensively hunted and trapped large game such as samba deer,wild boar and interestingly feral goats which roamed the marshes and closed canopy forests that enclose the lake,often spending weeks alone in search of his quarry.The area was also home to a large number of Sumatran tigers whose presence has significantly diminished over the past several decades, however pug marks can be still be found on occasion.

One late morning in 1987 as he was returning to his camp by the lake shore,he spotted a greyish figure standing about twenty meters away.He saw the creature from the back as it proceeded to run away at breakneck speed, grabbing at branches and leaves as it raced from a clearing near the shore and into the forest.

From his vantage point the creature appeared to have a thick waist and very wide shoulders, and its entire body was covered in dark grey hair.He estimated its height to be no more than 1.2 meters and the entire encounter lasted only 10-15 seconds. When he went to look for tracks, he was quite baffled to find human-like foot prints that led in the opposite direction to its movement.
In 1993 he encountered what he believed was the same individual in virtually the same spot.It’s also worth noting that two encounters in a span of forty years by a professional woodsman indicates that it’s an incredibly elusive and shy animal and chances of having a third sighting are nil. (Mr. Dan)
(Visited 19 times, 1 visits today)