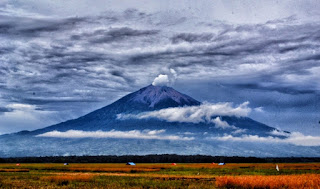 On a sunny morning around 9am Mr.Poniman made his way up to the end of a potato plantation on the slopes of Mount Kerinci. Like many of the inhabitants of the area,he worked the fields surrounding this enormous stratovolcano and had visited this particular location countless times but this day was to be very different.As he neared a clearing which was bordered by a dry stream bed with dense forest behind it he came upon a strange animal which was standing upright and somewhat resembled a pygmy gorilla.

The creature was standing almost motionless and observing him from a distance of approximately 10m. He estimated its height to be around 1.2m and it was covered with reddish brown hair which was of medium length and uniform across the body.The shape of the head was similar to a human’s and not pointed.The face resembled a gorilla except the eyes looked very human and the brow ridge was not particularly prominent.The face was hairless but appeared to be somewhat darker than the surrounding hair,the lips were thin.The neck-less head was set on incredibly wide shoulders,possibly 50% wider than that of a normal man.The arms and legs appeared to have very human proportions.
They watched each other for several minutes before it calmly started walking down to the dry stream bed taking steps in a side to side manner.On several occasions it emitted a “Hoo Hoo” sound as it slowly moved away and then proceeded to start grabbing at branches and leaves as it made its way up the bank and then into the forest. The entire encounter lasted for approximately 15 minutes and Mr Poniman was able to examine the tracks in detail. They where approximately 18cm in length with a pointed heel and the track depth was similar to his own foot prints, indicating a body weight of about 60kg. Interestingly,he also determined that the tracks led with the heel and the toes pointed in the opposite direction.
His son also encountered a similar looking creature on the same plantation in 1983 or 1984. (Mr. Dan)
(Visited 16 times, 1 visits today)