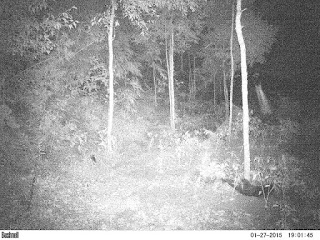 Orang Pendek is the generic Bahasa Indonesia name for the pigmy apeman said to inhabit the forested mountains  and valleys of central Sumatra. However,in the Kerinci region this unknown hominid is more commonly known as Tirraw. Sometimes the word hantu is added to the name to create Hantu Tirraw. This now means ghost or spirit Tirraw.
On January 27th my guide and I set up a trail cam on a remote plantation just below some steep jungle clad hills. The following morning when I examined the pictures through the view finder I was surprised that only one photo had been triggered,the rest being taken using the pre-set field scan mode. On closer inspection I found find that a strange and shadowy image had been captured at 7:01pm.To make things even more puzzling a 5-foot long stick that had been baited with fruit and stuck into the ground was missing from the photo.Only to reappear in the morning field scan shots leaning against a tree. 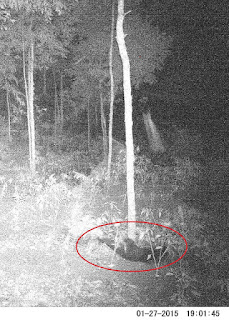 In the photo below the yellow elongated triangle represents the initial position of the stick when we left it at 5 pm.The red line is its approximate position in the morning.The blue circle indicates the area where something very black and without eyeshine appears to be lying on the ground,possibly falling ontop of the stick after trying to climb or pounce on it.

Since the object is lacking any distinguishable physical  features and its outline is barely discernible I can only speculate as to what it could be. My initial reaction was that it was a siamang or possibly a langur as there seems to be something elongated like a tail coming off the the main body.Other possible candidates would be a binturong or a local species of jungle feline,but once again the lack of detail makes it impossible to know for sure. As a result I will simply name it the “Hantu Photo”. (Mr. Dan)
(Visited 45 times, 1 visits today)