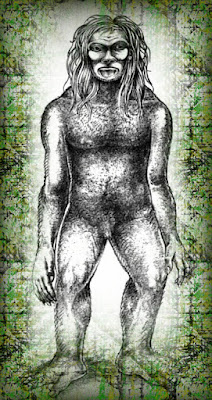 Introduction:
Stories abound of pygmy hominins still inhabiting remote regions of the Indonesian archipelago. The most well known of these is the so called Ebu Gogo of Flores, however most of  the recent reports circulating in the Indonesian media have come from the neighboring and much larger island of Sulawesi. In September of 2016 I was able to spend two weeks investigating these stories and below is summary of my findings.

Location & Habitat:
Equatorial  monsoon forests of southern Sulawesi, particularly
the region known as the Bone Regency (pronounced bone-eh).
Physical description:
Described has having a human-like body but standing well under four feet in height with long hair extending down to its shoulders and a minimal amount of body hair. Usually not clothed, however some were reported to be wearing a garment similar to a loincloth.
Behavior:
Believed to be nocturnal since most accounts refer to them being encountered at night as they moved around with torches. It is also said that they had tool-making abilities, and would often leave plates outside the cave.Very inquisitive and would venture close to the village when festivities were taking place. Not considered threatening, however some locals suspected that they were half “Jin”, which translates to demon.
Comments:
Most of the information was obtained from the village of Dekko in the heart of the Bone region. After conducting interviews with village elders and plantation workers and then exploring the cave, it is very possible that a family of Suku Oni inhabited the area until the late 1950s or early 1960s. Most people felt that they relocated to another area after being betrayed by the villagers. However a couple of farmers who have fields near the cave entrance still felt that one or two individuals might of stayed behind and inhabit the cave to this very day. It is also claimed that deep in the recesses of the cave lies a large chamber where a village made of stone and wood is to be found. However due to the extremely narrow size of the passages and cavities it has never actually been seen.

My personal feeling is that due to extreme habitat loss occurring throughout the island and a lack of recent encounters that these pygmy hominins went extinct some decades ago.The objective now would be to find their physical remains as well as artifacts associated with them. (Mister Dan).
(Visited 132 times, 1 visits today)