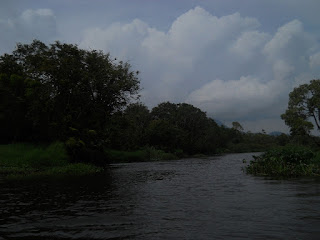 Approximately halfway between the towering Kerinci volcano and the mysterious mountain lake Gunung Tujuh lies an extensive tract of marshland and jungle-clad hills known as the Rawa Bento Swamp Forest. This area has an interesting history of Orang Pendek sighting and some of the first tracks ever described by a foreigner were found here in 1915 by the Dutch naturalist Dr. Edward Jacobson.

The marsh forest itself was virtually uninhabited until the early 1960s when small  farming communities began cropping up,eventually leading to large sections of the wetlands being converted into agricultural land,primarily rice paddy fields. Mr.Kitab moved into one of these villages in 1976, and built himself a small house about one kilometer from the center where the paddy fields merge with the marsh and forested hills.A skilled woodsman with vast experience in tracking and hunting game he would have to wait almost 30 years before it would be his time to encounter the region’s most infamous resident,Tirraw.
One clear evening with a half moon in full view the family dog started to bark feverishly.Surprised by the ruckus Mr.Kitab grabbed a high-powered flashlight and went to investigate.As he flung open the door his dog darted inside,he then quickly stepped out and shone a light into the yard.To his amazement and only about 10m away where the edge of his yard blends in with the rice fields was a man-like creature with the face of a monkey.

Only about one meter tall with very broad shoulders and a bulging abdomen, it was walking bipedally in a somewhat awkward side to side manner.Its arms slightly outstretched to the sides and from time to time it would reach out and grab at branches for support and balance.The limbs were of human proportions and its powerfully built body was covered in short brownish-red hair similar to that of a wild boar.The eyes did not reflect light when the flashlight was directed at them,indicating that it was most likely some form of primate and not just a misidentified known animal.

During the encounter,which lasted almost ten minutes, no audible sound was made by the creature as it slowly made its way along the field and then disappeared into darkness of the jungle.Due to the muddy terrain no discernible tracks could be made out, however,several years later he found what he believed were Orang Pendek footprints in the neighboring forest.

The entire event was also witnessed by his wife, making it one of the rare occasions where an Orang Pendek was observed by two individuals.
An interesting footnote is that Sumatran tigers were commonly encountered in the area until about twenty years ago.However, Mr. Kitab believes a black panther took some chickens from his yard about two years ago.This is a rather interesting statement as phantom panthers and melanistic big cats have been mentioned by villagers in several regions during my travels in central Sumatra,despite the fact that leopards (Panthera pardus) have never been officially recorded on the island. (Mr. Dan)
(Visited 24 times, 1 visits today)