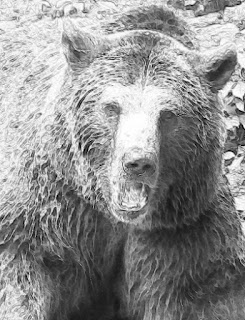 Several months ago I was finally able to get a hold of Professor Sykes’ latest book NATURE OF THE BEAST, in which the renowned human geneticist from Oxford documents his search for DNA evidence to support the existence of anomalous primates and relict hominds.
Although the release date of the book was moved on at least two occasions, his conclusions regarding the Yeti hair samples remain unchanged: an archaic proto-polar bear inhabits both the western and eastern regions of the Himalayas. This controversial hypothesis and the lab work associated with it has been peer reviewed and challenged on several occasions,most recently by Proferror Eliécer E. Gutiérrez  and Ronald H. Pines.
Having conducted my own field research in three separate areas of the Great Himalayan Range my personal opinion is that at least one type of Yeti, the massive and shaggy Dzu-Teh, is most probably an unclassified subspecies of Himalayan brown bear that exhibits exceptional bipedal abilities.

Although the controversial hairs were found in two very distinct regions,the Kingdom of Bhutan and Lahdak State
in India, I feel that there are two other areas where more evidence for the Dzu Teh-Yeti Bear connection could be found. My top two regions for the independent researcher would be both in Nepal.The extremely remote Kanchenjunga region which straddles both Nepal and Sikkim,India and the western Dhaulagiri range,particularly the valleys and mountains enclosing the Konabon Glacier. Both of these areas have a considerable amount of historic Yeti reports and below is a brief photographic overview of these two magnificent regions.

If the Dzu-Teh is a known or unknown sub-species of brown bear,then what about the man-sized Meh-Teh? Said to inhabit the temperate and subtropical valleys of Nepal, most of which today are found within buffer zones of various national parks.These regions are also well populated and recent credible sighting are virtually nonexistent. If a relict and breeding population of these creatures does still exit then we have to look elsewhere.Venture further south to India to one of the wettest regions on the planet,the rain forests of Meghalaya. (Mr. Dan)
(Visited 96 times, 1 visits today)