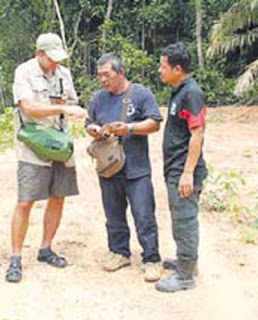 The very first cryptid that I investigated was the anomalous primate historically called Orang Dalam ( Interior Man ). More commonly known today as Orang Mawas or the Johor Hominid,this creature is said to inhabit the lowland rain forests,or what’s left of them in the southern Malaysian states of Johor and Pahang.
Virtually unknown to the outside world until stories of enormous tracks and jungle giants began trickling out of Orang Asli settlements in the late 1960s. It then  made international headlines when writer and adventurer Harold Stevens and photographer Kurt Rolfes found and photographed possibly the most convincing hominid trackway to date on a riverbank near the headwaters of the Endau river in 1970s. You can see these amazing images here : http://www.haroldstephens.net/node/258
In the years since there have been sporadic reports of tracks and sightings but nothing of real significance.The following is a collection of photos from various investigations which I have conducted over the past eight years. Unlike my research into Orang Pendek I have yet to organize a proper “full blown” expedition into the heart of the jungle inhabited by the “Man of the Interior”. However,that may change in the very near future. (Mr. Dan)
(Visited 101 times, 1 visits today)